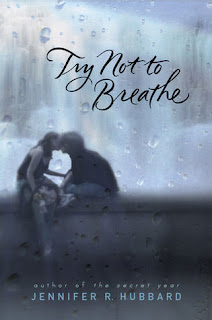 Title: Try Not to Breathe

Author: Jennifer Hubbard
Publisher: Viking
Publication Date: Jan 2012
Classification: YA Novel
Challenge: Outdo Yourself
Summary from Goodreads:
Ryan spends most of his time alone at the local waterfall because it’s the only thing that makes him feel alive. He’s sixteen, post-suicidal, and trying to figure out what to do with himself after a stint in a mental hospital. Then Nicki barges into his world, brimming with life and energy, and asking questions about Ryan’s depression that no one else has ever been brave enough—or cared enough—to ask. Ryan isn’t sure why he trusts Nicki with his darkest secrets, but that trust turns out to be the catalyst that he desperately needs to start living again.
My Thoughts:
This book starts off by introducing the reader to Ryan, who just recently got out of a facility for trying to kill himself. In the beginning I was instantly wondering why Ryan’s life was so bad that he had tried to kill himself in the first place, also Ryan has a secret that he has never told anyone, not even the doctors. So I instantly wanted to know more about Ryan and I thought it would be cool to read a book that is written in the male perspective.
As the novel goes on Ryan has flash backs about his time in the facility and the friends he made there. Ryan also meets a girl named Nicki who claims he is the only one who can help her understand why her father killed himself. It is fun to watch these two try to help each other through the problems that they are both experiencing. There were a few hang ups for me on this novel though.
The hangups included the fact that the reasons behind Ryan wanting to kill himself just didn’t really seem that real to me. It seemed like he took his situation and expected the worst even though he was just barely trying to handle his situation, it was like he didn’t even try at life before he decided he wanted to quit. I know that not everyone is as mentally strong as other people but his reasons just didn’t seem valid. Also Nicki was never the girl that anyone was expecting, if anything she was the one who needed to be in a facility instead.
Overall, this one had a really good message in the end but I’m getting a little tired of novels lately having to have these big messages. Yes, it is important for teens to know they are not alone and that they can get help, and life has its ups and downs, but it just felt too preachy to me. I appreciate the message but sometimes I just want to read a book for enjoyment, not to have a profound message. Maybe I just wasn’t in the right mood for this one so it only gets 3.5 hearts from me.

4 Responses to “Try Not to Breathe”