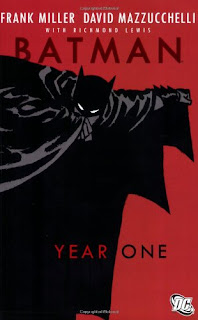 Title: Batman Year One
Author: Frank Miller, David Mazzucchelli, and Richmond Lewis
Publisher: DC Comics
Publication Date: Jan 2007
Classification: Graphic Novel
Summary from Goodreads:
A young Bruce Wayne has spent his adolescence and early adulthood, traveling the world so he could hone his body and mind into the perfect fighting and investigative machine. But now as he returns to Gotham City, he must find a way to focus his passion and bring justice to his city. Retracing Batman’s first attempts to fight injustice as a costumed vigilante, we watch as he chooses a guise of a giant bat, creates an early bond with a young Lieutenant James Gordon, inadvertently plays a role in the birth of Catwoman, and helps to bring down a corrupt political system that infests Gotham.
My Thoughts:
Batman happens to be a complex character that has many different layers, much like an onion. He is a billionaire playboy by day and a dark avenger by night. His motives are just; protect the citizens of Gotham as they are truly in need. Almost everyone is aware of who Batman is, thanks now in large part to Christopher Nolan’s movies starring Christian Bale as the titular character. This dark and brooding, yet accurate, take on the Dark Knight has been met with widespread critical acclaim. But how does it all begin?Yes, there was ‘Batman Begins’, which fully illustratred the beginings of Bruce Wayne,  but the original source material is always much more fun  to investigate. This is where Year One comes into play. Year One was written by one of the most prolific and influential writers in all of Comic-lore, Frank Miller. His take on Batman strips away all of the gizmo’s and gadgets and gets down to the bare essentials. It is an origin tale and is one read that is both  fast and fun. As made clear by the Christmas In My Mailbox, I was reading this graphic novel right away. It only took me about an hour to get through the entire piece, but I found myself even reading it again and again.Year One shows Batman to be a novice at crime fighting. He stumbles at times and get injured quite a bit, which is different than how most have seen the Dark Knight portrayed. Instead of him being almost superhuman, he is flawed and makes mistakes. One of the first instances of his crime fighting foryas, Batman almost accidentely lets a punk kid drop off a ledge to his death. Luckily he catches him yet still curses himself for being so clumsy. He is not the condfident Detective we all know him as; he is nervous almost. That is one of the reasons this novel was so much fun to read. Batman’s relationship with eventual Commissioner Jim Gordon is also worthwhile, as his backstory is also portrayed to a point. AND THERE IS NO ROBIN!! That was perhaps my favorite thing about this entire story as I always thought the inclusion of his sidekick made Batman too weak and even a bit soft. I also wasnt comfortable with the short tights Robin wore. Put some pants on kid, jeez!

This is not my favorite Batman tale but it is an essential for any reader that loves the Dark Knight as much as I do or even for the casual fanboy or a casual reader in general. Start wtih this story and then move on to some of the more daunting tales, such as ‘The Long Halloween’ or ‘Hush’.

A fun story with an excellent delivery. The artwork adds to the grit of the story and to Batman himself. It is not a polished look  for the Dark Knight, which some might find to be a bit of an annoyance but I thought it served its purpose well.

One Response to “Batman: Year One”