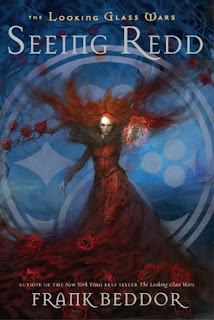 Author: Frank Beddor
Publisher: Dial
Publication Date: Aug 2007
Classification: YA Novel
Summary from Goodreads:
Alyss of Wonderland’s rule has only just begun and already those who prefer chaos to peace are threatening to destroy everything worth imagining. Trailed by newly appointed Royal Bodyguard Homburg Molly, Alyss does her best to keep pace with the spiraling, non-stop demands of being Queen while attempting to evade Molly for a few private moments with Dodge. Alyss’s life is already a challenging mix of duty, love and imagining when a series of phantom sightings set fire to an urban myth of her Imperial Viciousness’s return and have everyone…Seeing Redd. Has Redd somehow freed herself and her chief assassin, the Cat, from the confines of the Heart Crystal to challenge her niece once again? If not, then who has resurrected Redd’s brutal footsoldiers, the Glass Eyes, and set them loose to attack Wonderland on all sides? Battles rage, looking glasses explode and the Alyssians are once again uniting to defend White Imagination in this fast-paced second book in The Looking Glass Wars trilogy.
My Thoughts:
Here we are back again for another jaunt through the looking glass. The battle for Wonderland was won by Alyss of Heart but the war is just beginning. The last book, ‘The Looking Glass Wars’, ended with Alyss defeating her wicked Aunt Redd and seemingly vanquishing her from all of imagination. As with any tale, pure evil never truly dies; it evolves.
‘Seeing Redd’ is the title of the next chapter of Frank Beddor’s sprawling saga of the reimagining of Louis Carrol’s timeless classic. In very rare occasions, the sequel turns out to be better than its original. Take Aliens for example (directed by James Cameron), which in many ways was superior to its predecessor, Alien (directed by Ridley Scott). Empire Strikes Back is another example of a sequel being superior to its original and might possibly be the best example of all (Yeah, I get it, these are examples of film and not novels but hey, its my posting so you can bare with me J). ‘Seeing Redd’ does not fall into that category. It is not to say this novel was inferior or that it flat out sucked, it just did not engage me as much as the first novel did.

I found myself finishing up this book in about a few hours time since Beddor’s writing style is fun and entertaining, but the storyline did very little to entice me to read its conclusion. The entire novel seemed as though it was building up to something but did not deliver until the last twenty pages. In the second novel of Beddor’s trilogy, it would seem an epic showdown was brewing between the newly materialized Redd and her niece Alyss, who took control of her destiny and engaged her imaginative powers by way of the Heart Crystal. That simply did not come to fruition. If one was expecting a Luke and Vader showdown ala Empire Strikes back (aha! I did it again. My post-my rules), they were sorely disappointed. The most interesting aspect of this book was the side quest of Hatter Madigan and Homburg Molly. Without giving away any of the crucial details which made this so interesting to me, I can say that if anyone thought Hatter Madigan was just a stoic character whose only purpose was to kill and protect Alyss then this will be such a grand treat.

All in all, I found the book to be an entertaining read but not invigorating in terms of story progression. The character development seemed to stall for some, which would have benefited their own stories as it would show how they changed from book one to book two, yet some of the characters such as Hatter Madigan benefited from the weird pace.  Slow and plodding at times and other times it felt too rushed, it is still a fun read and if anyone liked the first novel then I would most certainly recommend picking this up in anticipation for the conclusion.

good as the first. Let us hope the conclusion ends with a bang (was that just an adjective or an actual spoiler for this book? Hmmm pick up the book and find out).

No Responses to “Seeing Redd”