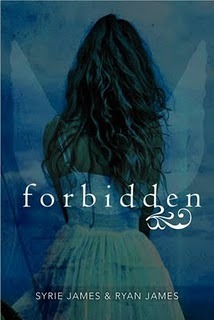 He should not love her.

Claire Brennan has been attending Emerson Academy for two years now (the longest she and her mom have remained anywhere) and she’s desperate to stay put for the rest of high school. So there’s no way she’s going to tell her mom about the psychic visions she’s been having or the creepy warnings that she’s in danger.

Alec MacKenzie is fed up with his duties to watch and, when necessary, eliminate the descendants of his angelic forefathers. He chose Emerson as the ideal hiding place where he could be normal for once. He hadn’t factored Claire into his plans. . . .

Their love is forbidden, going against everything Alec has been taught to believe. But when the reason behind Claire’s unusual powers is revealed and the threat to her life becomes clear, how far will Alec go to protect her?

My Thoughts:
I was very excited to read this book because I love when adult authors decide to write a teen book. Plus I always think it is interesting when two authors come together to write one storyline. Sometimes such a thing is a flop and other times it works out so seamlessly. I would have to say that having two authors of this book was an advantage for the book, the story was not choppy in any way, the writing flowed from one author’s writing to the others. The advantage of this was that Claire had her own voice and so did Alec, although Alec’s voice is often pushed aside because the story is mostly about Claire.
Moving past the fact that two authors wrote this book was the storyline itself. Now the story was about angels, nothing original there and it was reflected by some of the same things that happen in other angel storylines. The one unique fact/twist to the regular angel lore was the fact that Alec was a warrior, a person who killed when necessary even though he is an angel! This was such an amazing concept that honestly sometimes the only thing that kept me reading was this simple impossible fact about Alec.
I kept turning the page not for the been there and done that romance, not for the regular angel facts, but for this one little twist. Trust me the book did not have that many twists, the story was rather predictable for the majority of the time, but the fact that we have an angel running around killing was shocking to me. Of course Alec is killing the bad guys called Fallen but still, he is an angel and he is killing people, it is his job.
Overall, this was one of those times where, while a chick lit romance was cute, it was been there done that. What I was more interested in was the cool fighting, the fact that there was such a thing as an angel assassin. This book felt like a chick flick movie where some fighting was thrown in to keep a male interested and instead of getting gushy about the romance I was waiting for Alec to kill some people! The book of course ended on a small cliffhanger, at this point I’m not dying for the next book but I liked the storyline enough to give book two a shot. So because this one is cookie cutter in the world of teen paranormal stories except for one aspect it gets 3.5 hearts from me.

No Responses to “Forbidden”