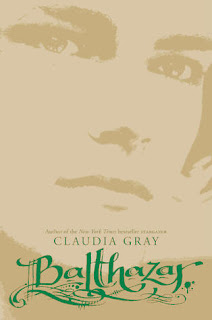 Author: Claudia Gray
Publisher: Harper Teen
Publication Date: March 2012
Classification: YA Novel
Challenge: Outdo Yourself
Summary from Goodreads:
Haunted by memories from his first days as a vampire, Balthazar has spent hundreds of years alone—without allies, without love. When he emerges from his isolation to help Skye Tierney, a human girl who once attended Evernight Academy, Balthazar has no idea how dangerous it will be. Skye’s psychic powers have caught the attention of Redgrave, the cruel master vampire responsible for murdering Balthazar and his family four centuries ago. Having learned of Skye’s powers and the remarkable effect her blood has on vampires, he plans to use her for his own evil purposes. As they stand together to fight the evil vampire, Balthazar realizes his lonely world could finally be changed by Skye…just as Redgrave realizes that he can destroy Balthazar once and for all by taking her for his own.

Sigh…Balthazar….he was always the dreamy sweet guy in the Evernight series but, while he was dreamy he also had a dark past. I always tend to love male characters that have this dark past or they are hiding something from the reader, makes the character more intense and interesting. Let me tell you that Balthazar didn’t let me down, he was exactly like I always thought he would be if we got to see more of his character. This story can stand alone but let me tell you that it does pick up where Afterlife (Evernight Book Four) leaves off. So ultimately, I would suggest that you read the entire series before you get to this book, it will greatly help you understand the things that are going on. I personally loved that it continues some of the storyline from the original series, yet it does carve out its own path.

In the story, Blathazar has traveled to where Skye lives in order to protect her from a vampire, or so he thinks. Balthazar and Skye come to find out that they are not fighting off one vampire, they are fighting off a group of vampires. To make matters even more interesting these are not just any run of the mill vampires, nope, they are the ones that made Balthazar into a vampire in the first place, the people he hates most among the inhabitants of the world. Balthazar has always wanted revenge on the people who not only changed his life forever but took away his first love about 400 years ago, and made his sister a vampire as well.

The great and sometimes not so great thing about this book were the details that were included on Balthazar’s past. In the Evernight series, the reader never really learns how he became a vampire or how his first love, Jane, died. The reader only knows that Balthazar doesn’t like his past and will not talk about it. It was great to learn the full extent of his past but it was often at the expense of the story progression. There were areas of the book where Gray just broke off from the storyline to shove in an area of his past, these moments were great to better understand Balthazar, but them just being shoved in felt awkward and slowed down the progression of the present storyline.

Even though those pieces of Balthazar’s past were awkward at times the storyline itself was great. I greatly enjoyed the fact that Skye and Balthazar had a lot of issues to work past and that their love didn’t slap you in the face on page five like many teen stories do. The love was allowed the time to grow and become very real, which was the best part of the storyline for me. I loved the dark background and undertones to the story and I enjoyed that the characters never fell flat, they were all well crafted. The characters, especially, Skye, had real emotions, she experienced a range from her sarcastic jokes, to her moments of total break down, and her love of a vampire. These emotional moments really shown well for me, I love the depth that Gray can pull off with her characters and the emotions. These characters were real and well developed!

Overall, I don’t think I’ve ever been in love with an Evernight novel, this is no exception. I did greatly enjoy Balthazar and Skye’s story but something kept me from being in love with it. I will always appreciate these characters because that is something Gray does exceptionally well at. So for a great book this one gets 4.5 hearts from me. I’m hoping with the way that Balthazar ended that this is not the last of the Evernight novels because even though I don’t love this series, I do greatly enjoy it.

No Responses to “Balthazar”