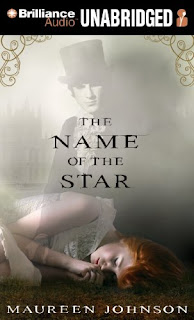 Publication Date: Oct 2011
Classification:YA Novel
Challenge: Outdo Yourself
Summary from Goodreads:
THE DAY Louisiana teenager Rory Deveaux arrives in London marks a memorable occasion. For Rory, it’s the start of a new life at a London boarding school. But for many, this will be remembered as the day a series of brutal murders broke out across the city — gruesome crimes mimicking the horrific work of Jack the Ripper in the autumn of 1888.


Soon “Rippermania” takes hold of modern-day London, and the police are left with few leads and no witnesses. Except one. Rory spotted the man police believe to be the prime suspect. But she is the only one who saw him. Even her roommate, who was with her at the time, didn’t notice the mysterious man. So why can only Rory see him? And more urgently, what is he planning to do about her?


In this edge-of-your-seat thriller, full of suspense, humor, and romance, Rory will learn the truth about the secret ghost police of London and discover her own shocking abilities.

My Thoughts:
I had heard from a couple of people how great this novel was so I knew I had to give it a shot. The story started out with a bang and I was instantly interested, however it was a little shocking when that story turned itself around and was a different female leading character than the one I was just introduced to in the first chapter of the book. The book is split between chapters on Rory’s life and little chapters on Jack the Ripper murder cases, clues basically. This seemed an ok way to go at first but it started to annoy me in the beginning to middle of the book because it felt like the Jack the Ripper cases really had nothing to do with the parts of the story that were about Rory’s life at her new school in England. It was almost like having two separate storylines for a very long time. Plus the clues were all in those small chapters about the murder cases so you really had to pay attention so as not to miss a clue that would pop back up into place later on.

I also felt that while the main character, Rory, was nice, I just didn’t fully connect with her. I would honestly say that the people I connected the most with were the batch of special force police officers who were secondary characters, my favorite of which was Callum! Goodness I loved Callum, his plain and blunt sarcasm provides many of the great laughs of this book, the book would not have been the same without Callum. I’m sure many of you at this point are thinking that Callum must be the male love interest, nope! The male love interest was this rather plain, somewhat boring boy named Jerome, who could never really commit to Rory. The romance between them was really something that bothered me during the whole novel because I felt like they were friends who just made out on occasion and the making out, UGH the author was descriptive in a way that discussed the spit and such of making out, it didn’t feel romantic at all!!

I know so far I sound very negative about this novel, I wouldn’t say it was a bad novel, there were some great points but I just felt I only connected with part of the story. Sure the Jack the Ripper murder cases were cool to learn about but I connected much better with the aspects of the story that had to do with the special force police task, a group of older teenagers who are responsible for so much more than what meets the eye. If I were to read the second book it would be because of the three officers, Stephen, Boo and of course Callum. So I really don’t know, can you say you liked an entire book when you really were only enjoying half of the point of the whole novel?

Audio Experience:
I honestly loved the audio, I loved the woman who was the narrator because she really got into all of the roles and could do the accents of each character very well. It was the best audio I have ever listened to and if you ever listen to one audio it should be this one, the story might not have been all that but the audio certainly was great in the sound department.
However, I still feel like sometimes I still feel a little disconnected with the storyline when I listen to a book instead of read it so I still am on the fence about audio books. Maybe I would have enjoyed The Name of the Star more had I actually been reading it, or maybe the audio was the only thing that kept me interested, the world may never know!

So overall I liked pieces of the storyline and I really enjoyed the narrator’s voice on the audio. This whole book and audio experience gets 4 hearts from me, and it is only that high because the audio made up for some of the places that the actual book was lacking in, at least for me anyway.

No Responses to “Audio Review: The Name of the Star”