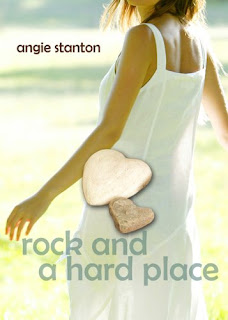 Title: Rock and a Hard Place
Author: Angie Stanton
Publisher: Angie Stanton
Publication Date: May 2011
Classification: YA Novel
Challenge: Outdo Yourself
Summary from Goodreads:
One day while watching the Interstate exit for her dad’s long awaited return, Libby’s life is rocked when Peter Jamieson steps off his tour bus and into her life. After a couple chance meetings with Peter, Libby shifts from her perfect behavior and breaks rules to find out more about him.

Peter longs for normalcy away from the screaming fans who know nothing about the real him. He is amazed to discover Libby has never heard of him or his band. Soon their friendship turns to love. Peter battles his families growing interference to spend time with Libby, while she struggles with her eccentric aunt who turns more bizarre each day.

When I opened up this book from Angie, who sent it to me for review, I was shocked by the fact that the book was only about 150 pages. I always seem to find that shorter novels are not as in-depth because they are so short and things must happen so quickly. I’m happy to say that I judged Angie’s novel completely wrong, just because it was short didn’t mean it wasn’t full of action, emotions, and romance at every turn.
In fact, the reason that I enjoyed this novel so much was for the emotional rollercoaster ride that the reader is sent on as they read this novel. From the beginning the reader really feels for Libby as she struggles with the fact that her mother and sister are dead and she her father has left her behind at her crazy Aunt’s house. While she is sitting around at a park one day she meets Peter, who claims he is the lead singer in a band. Of course Libby has removed herself from the world so she has no idea who Peter even is, this fact makes Peter very excited because he is tired of meeting girls that just fling themselves at him. Libby is the girl who is different, she is the one who is going to change everything.
A very quick romance starts up between the two and you can’t help but fall right along with Libby and Peter. Of course because of Libby’s present state and Peter always being gone for concerts there are several bumps in the road, some that I never saw coming.
Overall, this story is told in opposite view points from Libby and Peter, it was great to see both of them and what they were feeling as they were together and during the times they were forced apart. It was heartbreaking to watch some of the things that Libby had to go through. Of course this is offset by the pain that Peter is feeling over Libby. The emotions in this story are beautiful, there were several times where I was brought very close to tears. The only reason I probably didn’t cry when I wanted to was due to the fact that I was at work while I read this book. I consumed this book, read it in one day, and let me tell you I’m up for more writing from Angie. She proved me wrong about shorter novels and I really enjoyed her characters, her writing, and the powerful emotions. The mark of a great book to me is one where I feel those intense emotions of pain, heartbreak, love and loss. Since I was able to be so emotional with this story and connect so well this story gets 5 hearts from me.

3 Responses to “Rock and a Hard Place”