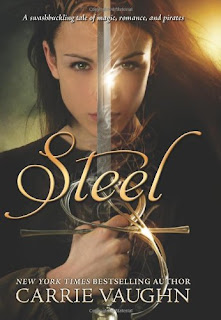 Title: Steel
Author: Carrie Vaughn
Publisher: Harper Teen
Publication Date: March 2011
Classification: YA Novel
Challenge: Outdo Yourself
Summary from Goodreads:
Sixteen-year-old Jill has fought in dozens of fencing tournaments, but she has never held a sharpened blade. When she finds a corroded sword piece on a Caribbean beach, she is instantly intrigued and pockets it as her own personal treasure.
My Thoughts:
Jill is just an normal 16 year old girl who has gone on vacation with her family after losing a fencing match. She is just hanging out at the beach when she finds part of a pirate sword, she decides since it is only part of the sword she can keep it because no museum wants just a piece of a sword. Later in the day she finds herself on a boat tour with her family when she accidentally falls into the water. When someone grabs her to help her out of the water she finds herself among a crew of pirates. It turns out the sword piece that she found is very valuable, it was once part of a sword forged in magic by an evil pirate king.
I really enjoyed that this story mixes pieces of modern day with part of the past. I have never read a pirate book before so I was excited for this one. While at some points the story feels a little bit like the movies it does have it’s own flare. The writing is really what easily draws in the attention of the reader, everything is so detailed you will feel as if you are standing on the ship. While the descriptions of the scenes are rather beautiful there isn’t a whole lot of character development in this novel. A lot of the story centers around living the pirate life and describing everything that involved. Pirates are suppose to be the ones who hold all of the freedom out on the open sea after all.
Overall I really did enjoy the beautiful writing style that this book had. I did enjoy the characters even though I felt I didn’t fully get to know each of them. I feel that there is a great message in this book though that many people are glossing over. From average ratings on goodreads only being about 3.25 it seems many people struggled with the overall picture painted in this novel. The story isn’t just about the characters and the evil pirate king, it has a life lesson, you just have to find it. I say go into this book with an open mind because it is a story about adventure and understanding oneself better, not necessarily about finding love, which is a theme many people are attached to these days. Overall I give this book 4.5 hearts and I really now want to go back and read Carrie’s other book Voices of Dragons.
Quote:
“That’s right, sir, you have been captured by that bloody pirate queen, harridan of the waves and witch of the sea. And you are very, very wise to offer yourselves so freely. Though I rather wish you’d put up a fight- I’m disappointed I won’t be murdering you and sinking your boat. Now- one word of argument from any of you and I will.” She made a stunning picture standing before him, hands on hips, her coat buttoned, her high boots polished, her hat firm on her long, curling hair, and her face like that of an avenging goddess. Her mob of demons was arrayed around her.
~Pg. 74-75 Steel