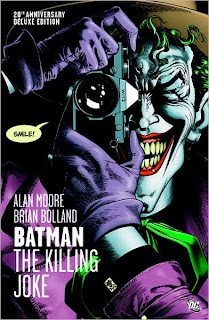 Author: Alan Moore and Brian Bolland
Publisher: DC Comics
Publication Date: March 2008
Classification: Graphic Novel
Summary from Goodreads:
For the first time the Joker’s origin is revealed in this tale of insanity and human perseverance. Looking to prove that any man can be pushed past his breaking point and go mad, the Joker attempts to drive Commissioner Gordon insane. After shooting and permanently paralyzing his daughter Barbara (a.k.a. Batgirl), the Joker kidnaps the commissioner and attacks his mind in hopes of breaking the man. But refusing to give up, Gordon maintains his sanity with the help of Batman in an effort to best the madman.
My Thoughts:
If this book is to be hailed by Tim Burton, (the director of Batman and Batman Returns) as his favorite Batman story, then that alone should entice readers to pick up this epic tale.
Inisde the confines of this story, one of comic’s most sinister and cruel characters is given a backstory; The Joker. This story might not be as long as some other Batman tales, but it holds its own against any one of them. It would seem as though the synopsis of the story gave away a lot of the plot elements that make this tale so compelling. The Joker escapes from Arkham Asylum and seems dead set on crippling the life of the Dark Knight, even if that includes torturing those that matter most to him. The Joker does indeed paralyze Barbra Gordon and commits unspeakable acts against her. It would seem the Joker has finally snapped. And that is what makes this story so grand. Batman’s most prominent villain is set on making Batman break the one rule he has; not to kill criminals.
The artwork in the story seems to be as dark as its tone, and that sets the events in motion. The artwork works in sync with the story to make everything seem like a cohesive unit.
I found the origin story of the Joker to be a bit off, as I never thought we, the reader, should know the true story of the Joker. I thought he worked better as a mysterious character. It was later retconned that he is so insane that he probably doesnt even know his real life story. What is fact and what is fiction? It is all just a killing joke.
That appears to be my only complaint in regards to the story itself. I would like to make note to the readers of this review that if they happen to read this story, they should leave a comment in regards to the final panels of the story. The Joker has been caught and he has no where to run, so instead of trying something daring, he tells a joke. This joke holds a significant purpose in Batman lore and the final panel is left ambiguous in regards to the Joker’s fate.
It might be of importance to note that this story was part of the source material for Heath Ledger when he was preparing his role for the Dark Knight.
I do hope you all entertain yourself with this Killing Joke. It is to die for.

One Response to “Batman: The Killing Joke”