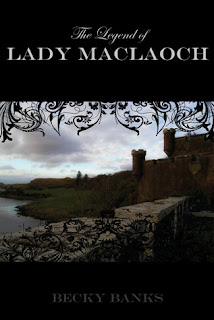 ﻿Title: The Legend of Lady MacLaoch

Author: Becky Banks
Publisher: Ha’iku Press
Publication Date: May 2011
Classification: Adult Romance Novel
Challenge: Outdo Yourself
Summary from Goodreads:
A legendary love, an unforgiving curse, and the discovery of a lifetime …
Centuries ago a vengeful curse buried itself deep into the history of the MacLaoch clan and become a legendary tale told by all those not cursed by its words.

In present-day Scotland, the laird and chieftain of the MacLaoch clan is an ex-Royal Air Force fighter pilot who has been past the gates of hell and returned a changed man. Rowan MacLaoch does battle with wartime memories and a family curse that threaten to consume him—unaware that his life and that of the history of the clan will be changed forever by the arrival of an American woman.

Cole Baker, a feisty recent graduate of a master’s program, stumbles upon the ancient curse while researching her bloodlines. Moved by the history of the MacLaoch clan and the mystery of its chief, she digs into the legend that had been anything but quiet for centuries.

My Thoughts:
I honestly didn’t know what to expect when I started reading this book. I thought I was going to be taken back in time to the time period of highlanders. What I was shocked to find out was that the entire book takes place in present time. It was very interesting to see a highlander in modern day setting yet with a historical romance twist because they are talking about things that they would in a novel set in the past. I feel like I was able to get not only a great contemporary story but also a great historical romance as well.
First off I love that Cole and Rowan do not get along at all in the beginning of the novel. Don’t ask me why but I love the witty banter between a couple when they are claiming that they can not stand each other. For that reason I was instantly drawn into Cole and Rowan’s world in Scotland. Plus who wouldn’t want to be reading about a setting that they normally don’t get to see much of. I thought the world and the characters were all very well established and I found myself loving Cole and Rowan and hating some of the “evil” characters in the book, which is exactly as it should be. While the characters were great the story did become a little predictable in some places.
Overall, I really did fall for Cole and Rowan’s gradual romance and I did like all of the historical elements that were part of the story. I can appreciate the curse that Lady MacLaoch put on the men in her family line and it was fun watching Cole and Rowan try to break the curse that says that the men of the MacLaoch shall not love until they have felt the same amount of suffering that Lady MacLaoch felt when she watched her beloved be murdered and was forced to marry a different man. I won’t tell you exactly how the mystery in the story unfolds because you have to read that for yourself. I will tell you that this was a great novel and that the only thing I would change is that I wanted more Cole and Rowan time. I wanted their love to be a little bit more spicy with a little bit more heat to the love scenes. Other than that one small detail I greatly enjoyed this novel and can’t wait to see what Becky has planned for her next novel.

One Response to “The Legend of Lady MacLaoch”