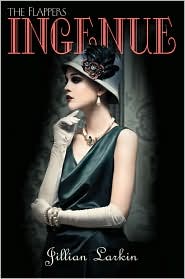 Title: Ingenue
Author: Jillian Larkin
Publisher: Delacorte Press
Publication Date: August 9, 2011
Classification: YA Novel
Challenge: Outdo Yourself
Summary from Goodreads:
Bobbed hair. Short skirts. Cool jazz. Dark speakeasy. Anything goes. Meet the flappers, Gloria, Clara, Lorraine . . . and the rich young boys who love and loathe them.
My Thoughts:
I really enjoyed the first book in this series, The Vixen, which is where the reader first meets Gloria, Clara, Lorraine and the newest member of the story Vera. Each girl had her own story to tell in Vixen and each has their own very unique personality. Towards the end of Vixen all of the girls were either in love and making choices for that love or were trying to clean up the mess left in Chicago. In Ingenue all of the girls are in their own separate areas of New York and they spend much of the book looking for everyone. There is a big plot that the mob boss has in order to get back at Gloria and the love of her life Jerome, for killing one of his head hench men.
I liked that this story moved away from Chicago to go to New York. It showed off a different side of the storyline because most of the main mob bosses sayed in Chicago although there are a few clubs run by gangsters in New York that are very well connected with the mob in Chicago. This means that Clara, Lorraine and Vera must each try to find not only each other but warn Gloria about the plot to kill her and Jerome. That is if Gloria and Jerome can even make their love last during all of the tough times.
Overall, I did enjoy the plot of the mob out to hurt my favorite characters in the storyline. The storyline itself was quite a bit depressing for this book though. Everyone was pretty much just trying to barely get by in New York, which is a big change from when they were rich in Chicago. Everyone was really living the lows of the 20s and finally understanding what it means to sing the blues and understand the soul music of the time period. There were a lot of ups and downs for the main four girls which will have any reader cheering and collapsing into the same depression that the girls are going through at times. The first story was all about love and making things work but while still living in glamour. I felt this story took it a step further for the fact that a lot of the glamour was gone and the main girls had to really fight for what they wanted in life. I really enjoyed the ending, even though it was another cliffhanger and I can’t wait for the third book which is titled Diva. Since I really enjoyed coming back to these characters even though they were all struggling I give this story 4.5 hearts.

No Responses to “Ingenue”