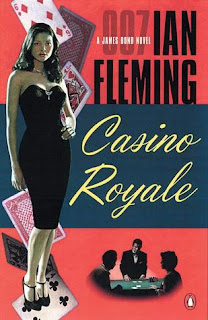 My Thoughts:
Ever since I was a small child, I was always a fan of 007. James Bond has been a hero of mine because I always found him to be the most realistic of all superheros. He has no superpowers but always fights for what is right. He is smooth and suave and essentially, the ideal man. Growing up, I would just think that is what I want to be. I have seen all of the movies and can even state which are my favorite actors: Sean Connery, Pierce Brosnan. Roger Moore and Timothy Dalton are tied, Daniel Craig, and George Lazeby. After all these years though, I have never read any of the novels.

The awesomeness that is James Bond began many years ago in written form by Ian Flemming. Many would think the movies were released in chronological order, with Dr. No being the first; tis simply not true. Casino
Royale is when the world was first introduced to agent 007.

The book is seemingly just like the movie Casino Royale, almost verbatum. I found the book to be a bit slow and plodding, but it would seem that it did it justice to introduce James Bond. I thought the majority of the book was spent describing blackjack, poker and raoulliete. If I ever go back to Vegas anytime soon I might be in luck. Aside from that, I did not think it to be necessary. To play devil’s advocate, I would say that describing the certain key details of the games added a bit to the story as it made the reader become more engrossed as to what James Bond was doing.

There was no hot, steamy sex scenes in the book which I might be on the fence about, but the book itself still served a purpose. The James Bond that is more commonly known to the modern world is not presented in this book. However, I might have to acknowledge the fact that this is his first outting. For the first appearance of such an esteemed character, it served a purpose but I do hope that the other novels will present him in the light we all know and love.

Not a lot of action but a lot of story was there in its place. The story might not have been the best as I have stated, but I am going to remain optimistic for future novels.