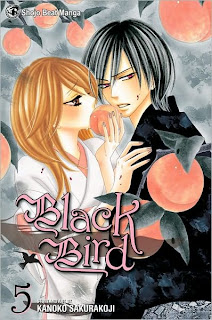 Title: Black Bird Vol 5
Author: Kanoko Sakurakoji
Publisher: Shojo Beat
Publication Date: August 2010
Classification: 18+ Manga
Challenge: Outdo Yourself
Summary from Barnes and Noble:
Misao thinks she’s come to terms with being the bride of prophecy and dating a tengu lord, but is she ready to bear her handsome demon an heir?! Kyo’s grandfather is impatient to secure the power of the prophecy and the line of succession, and he doesn’t care which of his grandsons fathers Misao’s baby. If Kyo doesn’t act fast, he’ll lose Misao and the leadership of the clan. But despite his desire for Misao, Kyo is hesitant to consummate their relationship, for that will bring about catastrophe…

My Thoughts:
In this volume we get to see more of the every day life of the characters. Some of the right up front action has slowed down which lets the characters live a bit of their own life. In this volume Kyo’s grandfather back home wants Kyo to hurry up and mate with Misao already. If Kyo does not get Misao pregnant soon then he might lose his position as clan leader. If he was to lose his position then the new leader of the clan would be the one to sleep with Misao. Of course Kyo being the overbearing protective guy that he is, he isn’t going to let some other man sleep with his girlfriend/girl he wants to be his wife.

At this point everyone is still unsure just what will happen to Misao if she has sex with Kyo and gets pregnant. So basically we didn’t really move very far into the storyline with this volume. It was fun to see the every day lives of some of the clan members that protect Kyo but I wanted a bit more. For the past few volumes the idea has always been there that Kyo has to sleep with Misao, he doesn’t do so because of the ramifications. The big problem with this is we don’t know exactly what will happen to Misao, is it nothing to worry about or should she begin running and screaming in the other direction.

Overall, I still love the artwork and the characters but I felt this was a filler novel. I really do want to move forward with the storyline because I’m getting a little bit impatient to learn just what happens between Kyo and Misao. Plus the guy hasn’t even really declared his love for her yet, it feels like they are doing this out of duty right now. I want to see a little more of a love connection happening and for things to be better explained in the next few volumes. Overall this one gets 3.5 hearts from me because although it was good I was looking for a little bit extra in this volume that was just sadly lacking, basically I’m impatient for answers!

No Responses to “Black Bird Volume 5”