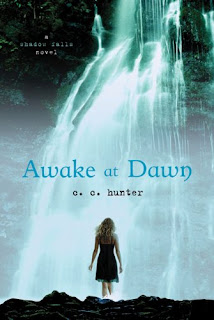 Author: C.C. Hunter
Publisher: St. Martin’s Griffin
Publication Date: Oct 11, 2011
Classification: YA Novel
Challenge: Outdo Yourself
Summary from Goodreads:
Now that she’s settled in at Shadow Falls Camp, Kylie Galen’s determined to discover the extent of her supernatural abilities.  But with a ghost insisting someone Kylie loves is about die, a rogue vampire on a murdering rampage, and her sixth sense telling her someone is watching her, Kylie’s quest for answers is quickly put on hold.

My Thoughts:
The first book in this series, Born at Midnight, was a great opening to what the series could be. I was super excited to be able to find an arc of Awake at Dawn on Around the World ARC Tours. Awake at Dawn starts off pretty close to where Born at Midnight left off. Kylie still doesn’t know what sort of paranormal creature she could be and she is facing the fact that Lucas is gone and Derek is pushing for more than friendship. Add to all of this the fact that ghosts are still showing up needing Kylie to help them and there is a rouge vampire on the loose.

There was a lot of different problems for Kylie to face in this novel. Did she face them well? In my opinion Kylie mostly did the best with what she had to go on the whole novel. She is a teenage girl so mistakes of course will be made, and there was a lot of crying scenes for her. I wish that the crying would have been cut down to be honest with you. To me there was just no need to get tears at every turn. I know that Kylie was frustrated with everything that was going on and everything she was feeling but her emotions were almost always all over the charts. This of course made her budding relationship with Derek very difficult because he can read emotions, Kylie’s emotions are especially powerful for him. Derek of course wants to date Kylie and even goes so far as to ask her out several times and have make out sessions with her but Derek also doesn’t want to get hurt. He knows that Kylie seems to still feel something for Lucas and he doesn’t want to jump into a relationship if Kylie isn’t sure of what she wants.

Overall, I did have my moments with this book. There were easily times of humor, sadness, and happiness, which I personally love when a book can make you feel all of those emotions. I would say the strong points of this book were the characters and the bonds that they have formed. Each character is great and there were many moments when I found myself cheering each person on or scolding them for doing something stupid. As much as I was in touch with the characters for this novel I felt that the actual plot was lacking. In 400 pages it just felt that the book really didn’t solve a whole lot, it was a filler book if you want to call it that. Some of the plot elements don’t get solved to the very end and then there is a cliffhanger, ah the dreaded cliffhanger. Final verdit is that I did love aspects of this novel but the plot really did suffer this time, I look forward to reading Taken at Dusk when it comes out in 2012. Overall this one gets 4.5 hearts from me, more like 4.25 but that isn’t a rating here at Pages of Forbidden Love.

Quote:
He arched an eyebrow. “It’s the ‘maybe’ in your answer that worries me more than the confusion you’re feeling right now.” He leaned his forehead down to hers. “Please don’t break my heart Kylie.”
Her own heart almost broke right then. “It’s the last thing I want to do.”
He kissed her softly, then pulled back.

No Responses to “Awake at Dawn”