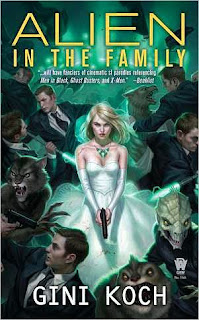 ﻿Title: Alien in the Family

Author: Gini Koch
Publisher: DAW
Publication Date: April 2011
Classification: Adult Sci-Fi Novel
Challenge: Outdo Yourself
Summary from Barnes and Noble:
Super-Being Exterminator Kitty Katt and the Alpha Centaurian she loves, Jeff Martini, should be finalizing their wedding plans. But that was before she discovers Jeff is in line to become Emperor back on his home world. Kitty knows she is everything a royal family wouldn’t approve of, and is bracing herself for the worst. As it turns out, the royal family is just the beginning. Especially when extraterrestrial Amazonian terrorists are determined to start and end Kitty and Jeff’s nuptial festivities with a bang.

My Thoughts:
In the third book of Gini’s Alien/Kitty Series we get to join the whole gang once again as they prepare for Kitty and Jeff’s wedding. Of course since this is Kitty and Jeff we are talking about of course the wedding planning doesn’t come together quite so easily. The reason that everything gets put on hold for a majority of the novel is that the A-Cs from Alpha Four have come to Earth in order to put Kitty through tests to see if she is worthy of marrying Jeff, after all he is of the royal bloodline back home. With the intention of testing Kitty as a background story havoc quickly ensues when the A-Cs that have come to visit along with members from othe other planets slowly reveal what they are really there for. Jeff needs to come back to Alpha Four to rule the planet as the current leader is old and sick. Will Jeff be able to leave Kitty behind?

Of course in this novel we get some great epic battles and plenty of evil plots against our leading couple. There are moments of pain, sorrow, tragedy, as well as happiness, love and basic all out ass kicking in store for the whole great cast of characters. Just like in Alien Tango I thought that sometimes the plots became a little too involved. It was hard at some points to keep each plot against the gang straight and the reader is often left confused until Kitty and Reader explain the situation to the rest of the group they are fighting with. So while I do love some good action and some of the evil plots that were out to harm Kitty and Jeff I feel that they could be toned down just a bit because they are almost overtaking the rest of the aspects of the storyline.

Now for positive things in this novel I felt the same great connection with the cast of characters that I have felt since the first novel in the series. I can’t help but love Jeff, Kitty, Reader, Gower, Chuckie, and of course the poofs! The poofs were so cute, for those who have no clue what I’m talking about they are sort of like pets to the A-Cs. There were also moments in this novel where I was holding my breath wondering what was going to happen and one time I was almost in tears. I love when a novel can invoke so much emotion because it means I’m truly involved in the storyline and the character’s well being. As an added bonus in this novel I finally got some more of the steam between Jeff and Kitty that I felt was lacking in Alien Tango.

Overall I still love this cast of characters and the witty back and forth conversations that never seem to stop. The action is always great but I just wish sometimes the action could move into the background a little bit more so that we can watch the characters grow and interact with each other some more. Basically if you haven’t picked up this alien series yet, even if you don’t like aliens, you don’t even understand what you are missing out on. I give this book 4.5 hearts for captivating me just as the other novels in this series have. Can’t wait for Alien Proliferation to be released in December!

No Responses to “Alien in the Family”