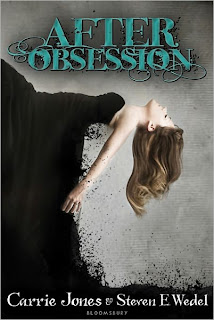 Title: After Obession
Author: Carrie Jones and Steven Wedel
Publisher: Bloomsbury
Publication Date: Sept 13th, 2011
Classification: YA Novel
Challenge: Outdo Yourself
Summary from Goodreads:
Aimee and Alan have secrets. Both teens have unusual pasts and abilities they prefer to keep hidden. But when they meet each other, in a cold Maine town, they can’t stop their secrets from spilling out. Strange things have been happening lately, and they both feel that something-or someone- is haunting them. They’re wrong. Despite their unusual history and powers, it’s neither Aimee nor Alan who is truly haunted. It’s Alan’s cousin Courtney who, in a desperate plea to find her missing father, has invited a demon into her life-and into her body. Only together can Aimee and Alan exorcise the ghost. And they have to move quickly, before it devours not just Courtney but everything around her.

My Thoughts:
Sigh, Carrie Jones first series Need went slowly downhill and I’m afraid she didn’t quite pull this new idea about demons/ghosts off. The whole story was just sort of bland and the leading lady had some big issues for me. Aimee can see things in her dreams and she knows it is The River Man who took her mother about a decade ago. Aimee starts off the story dating a guy named Blake who is a great guy, smart, charming, and the top of the cross country running team. This is the point when Alan comes to town and Aimee decides, “I don’t like Blake, I want that guy.” *Slams head against computer*

Honestly, the first two chapters held a great deal of promise for this story but the instant love connection is really overdone at this point. The worst thing about it is that Aimee declares instant love but then as the book goes on, they move away from the instant love connection for a bit to have a real story line. HUH! First she is saying she wants Alan then all of a sudden she wants to slowly get to know him and  be around him. While at the same time they are already boyfriend-girlfriend. The whole relationship in this book was all over the place, it was like the two authors couldn’t decide how to approach the topic and it left the relationship feeling confusing to the reader. Plus the whole River Man concept was just a little boring to me, where is the darkness??! This is always the problem that I have had with Carrie’s writing, she hints at darkness, first with her pixies, then again with a demon, but there is no darkness. Add onto all of this the weird medicine, spiritual stuff Alan does because of being half Native American and you have one jumbled up storyline.

Overall, there were some parts where the characters were actually working but they struggled in a lot of parts for me. I only had 70 pages left of the story at one point and I had to talk myself into reading them. I shouldn’t have to talk myself into finishing a book. I don’t mean to bad mouth Carrie’s writing as I’m sure many people love her stories but she is just becoming an author that I’m going to steer clear of. I always expect one thing and get something really different. I’m giving this story 3 hearts, it was ok but not something I’m going to buy to re-read.

No Responses to “After Obsession”