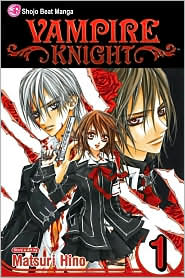 Author: Matsuri Hino
Publisher: Shojo Beat
Publication Date: Jan 2007
Classification: Manga
Challenge: Outdo Yourself
Summary from Barnes and Noble:
Cross Adademy is attended by two groups of students: the Day Class and the Night Class. At twilight, when the students of the Day Class return to their dorm, they cross paths with the Night Class on their way to school. Yuki Cross and Zero Kiryu are the Guardians of the school, protecting the Day Class from the Academy’s dark secret: the Night Class is full of vampires! Yuki Cross has no memory of her past prior to the moment she was saved from a vampire attack ten years ago. She was adopted by the headmaster of Cross Academy, and now works alongside Zero to guard the Academy’s secret. Yuki believes that vampires and humans can coexist peacefully, but her partner has different ideas…

My Thoughts:
As you can probably tell by the cover this is another manga book. This actually happens to be a pretty popular series from what I have heard so I was excited to dive right in and see what all the fuss was about. This story in particular is about Yuki who attends a private school after the headmaster took her in because she was attacked by a vampire. Her partner in protecting the school and monitoring the day class from interfering with the night class (which is entirely made up of vampires), is a guy by the name of Zero. At Cross Academy the big thing is that the day class must not know that the night class is made up entirely of vampires and that Yuki and Zero are there to protect the human students. The leader of the night class/vampires is a guy by the name of Kaname who is special to Yuki because he saved her life when she was a little girl.

As we all know vampires have been done over and over again but since this was only the first volume in the series you don’t get to learn much about the vampires. The story really centers around Yuki and Zero which I have to say I really liked Zero. The artwork for his character is simply stunning (I’ll post a picture below so you can see what I’m talking about). Zero has a big secret that he has been keeping from everyone for four years though and his secret is about to be blown.

The artwork for this manga is good, the only art that really rocked my world was some of Zero’s images and the chapter covers where you get to see Yuki posing with all of the vampires of the night class. What really stood out to me was the flow of the story. I had just read a manga before this where the storyline was a bit choppy so this one revived my belief that I was going to like manga. I did like how the storyline flowed and there was a good story plot introduced in this first volume. The only thing in the story that I didn’t like was that the author repeated the lines about the day class not knowing that the night class is made up entirely of vampires. I don’t need to be told this 5 different times in order to understand this fact.

Overall I thought the storyline, story flow and artwork were all good so I would give this volume of Vampire Knight 4 hearts. 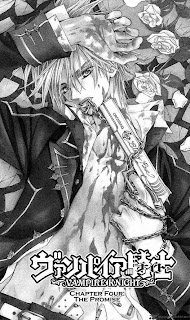