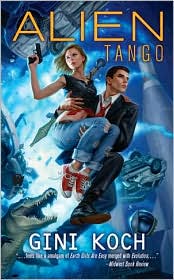 Title: Alien Tango
Author: Gini Koch
Publisher: Daw
Publication Date: Dec 2010
Classification: Adult Novel
Challenge: Outdo Yourself
Summary from Barnes and Noble:
It’s been five months since marketing manager Katherine “Kitty” Katt started working with the aliens from Alpha Centauri, and she and Jeff Martini are getting closer. But when an experimental spacecraft is mysteriously returned to the Kennedy Space Center, Kitty and the rest of her team are called in to investigate. Now the team must survive murderous attacks, remove a space entity from a group of astronauts, and avoid an unhinged woman with a serious crush on Kitty’s high school boyfriend. And that’s all before evil masterminds decide Kitty’s extermination is vital.

My Thoughts:
Finally, I found the time to come back to a set of characters and a writing style that I really enjoy. Of course in this second book we come back to see Kitty, Martini, Christopher, Reader, and the rest of the gang. The story starts out with Kitty and the gang being summoned to go to Florida in order to help with a NASA crisis over there. They are told they need to look as human as possible so they must take a commercial airline to fly there. This automatically sets everyone on edge, I mean they have alien technology and those travel gates for a reason. Within the first 100 pages of the book there are already two attempts made on the whole gangs’ lives and no one is quite happy at this point to be in Florida, but the worst has only just begun.

In the beginning of this book I had to refresh myself a little on who everyone is, considering if you take all the gang there is about 15 people to learn, about 5 of those are major key players in the series. Plus this book adds a couple new characters so at first I felt in character overload and a lot of what was going on in this book had to do with government problems. This threw me off for a little while because I missed the idea of superbeings but I quickly got back up to speed. By the time I was about 75 pages in I was completely wrapped up in the storyline and all of the action that Kitty and Martini seemed to be running into. There were three different plots against them at any one point in this novel so the action never stops. Of course Kitty and Martini still try to make time to spend together throughout all of the fighting/trying to save their own lives.

I really was taken with all of the action in this book but at certain parts I missed the romantic times that Kitty and Martini would sneak off to have, as there wasn’t much room for it in this novel. Any scenes that did happen between our leading heroine and hero didn’t seem as steamy as the ones in Touched by an Alien. I know you are all yelling at me right now that this is a sci-fi book not a romance one but, as a romance reader I love the romance, sue me! Although the romance was a little turned down in this book I still love all of the characters, Reader especially since he provides a much needed comic relief. If only he would turn straight so he could be with Kitty, (you have to read the series to really understand the relationship between Reader and Kitty because there is no real way to describe it).

Overall, I enjoyed this book almost as much as the first novel. It felt good to come back to a cast of characters that I love and will continue to root for in every book in this series. I have already started the third book called Alien in the Family because I just feel I need more of my Martini fix. So if you haven’t picked up this witty, action packed sci-fi series (with a side of romance), then you need to go get all three books right now. Overall I give this book 4.5 hearts for bringing me back to a world filled with characters that I will always enjoy.