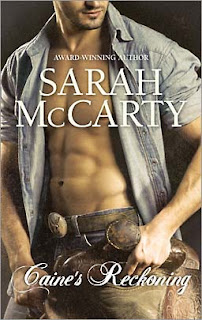 He hated the sound of a woman’s scream.

Synopsis:
The Hell’s Eight is the only family he’s ever needed, until he meets the only woman he’s ever wanted…Caine Allen is a hardened Texas Ranger, definitely not the marrying kind. But when he rescues a kidnapped woman and returns her to town, the preacher calls in a favor. One Caine’s honor won’t let him refuse. From the moment he beds Desi, Caine knows turmoil will follow. Desi might have the face of a temptress, but she also has a will of iron and while she needs his protection, she’s determined that no man will control her again. They establish an uneasy bond, but it isn’t enough for Caine. He wants all Desi has to offer. He wants her screams, her moans, her demands…everything. Yet there’s still a bounty on Desi’s head, and keeping her sexually satisfied is proving easier than keeping her alive. (via booksonboard.com)

Favorite Quotes:
“He sounded like he’d rather be nibbled to death by ducks.”

“Without my approval this marriage can’t take place,” the gambler piped up, clearly looking to shorten his life.

A shotgun cocked on Caine’s right. “Then give it.” Sam’s was short and to the point.

He didn’t give his approval, but he shut up, which was all the same to Caine.

Slightly Longer Review:
Ohmygosh! I’m going to fangirl gush through this review so consider yourself warned. Caine’s Reckoning is everything a historical erotic romance should expect to be. Not only is it a historical but it’s a western so you got some gun-slingin’ sexy as sin cowboys to go along with it. McCarty has set precedence with the first book in the Hell’s Eight series and now every erotica that I read will be held up to standard based on this book. The love scenes are intense, explicit and are sure to raise your temperature. With that being said, it is not just love scene (I use that word loosely with some of the erotica I have read) after love scene with no meat and potatoes to the story arc. McCarty gives us a story where we care about what happens outside of the bedroom as well as what’s going on in it.

Desi is so damaged at the beginning of the book. She’s had one damn traumatic past and it would be a lot to expect anyone to cope with. Caine is such a patient man when it comes to mending the broken. He tames wild stallions but can train sweet mares as well. He sees a treasure beyond compare within Desi if only he can make it past the towering walls she has placed around herself. Caine doesn’t feel like he has much to offer monetarily but what Desi needs now isn’t money but someone who is willing to work with and protect her.

The sexual tension between Caine and Desi ratchets up so intensely that you feel just as vested as the characters themselves and you’ll cheer for them as they find each other. If you enjoy historicals that are defiantly on the hot side, I cannot stress enough that you do not miss Caine’s Reckoning. The glimpse of the Hell’s Eight ranch that you get through Caine’s Reckoning will have you clamoring for the rest of the stories McCarty has to tell.