This is a great weekly theme hosted by The Story Siren.

Wow this week I got so many books I don’t even know where to start! 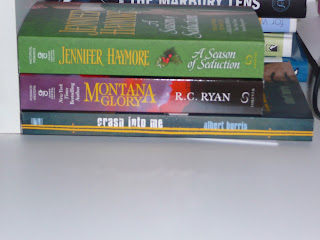 ~A Season of Seduction from One Book Shy of a Ful Shelf.
~ Montana Glory from Book of Secrets
~Crash Into Me from Books Complete Me

A Big thank you to all three of these wonderful blogs.

So I went to the used bookstore near my house just expecting to pick up some gently used romance novels and after I found The Devil Wears Plaid, Charming the Prince, and Lady of Conquest I went over to the teen section to see what they had. To my surprise they had a bunch of ARCs there and I wondered why on earth someone would sell these especially since you are not really allowed to do that. I decided to get them, well because I would love to read these stories and because an ARC Tour that I participate in could send them to several other people who wants to read them. The ARCs that I got are Spinning Out, Illegal, Vesper, The Trust and Rival. 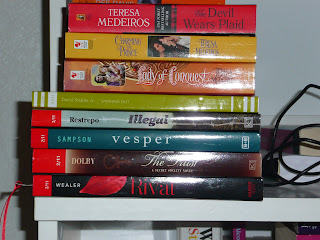 This second batch I bought for good reason. Bookish Delights was having a great deal to get 4 books for $21 so I got the first four in the picture from her. I got Touched by an Alien and Alien Tango because the author Gini lives in AZ and I went to get them signed. (Gini is a great person and I enjoyed getting the pleasure to meet her, ps. look for an extra set of these books soon featured on my blog). Finally I had apparently spent so much at Borders on my Rewards card that they gave me $5 in Border Bucks and Personal Demons was on sale for that exact amount so I got it for free!﻿ 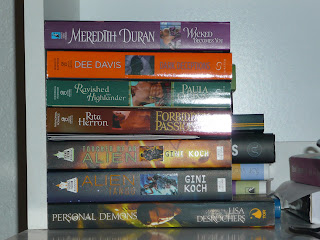 What did you get in your mailbox this week?
﻿