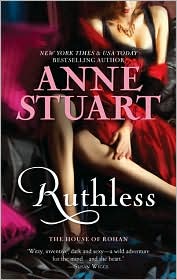 Summary from Barnes and Noble:
Few outsiders will ever witness the dark misdeeds of the Heavenly Host. And among this secret society, where exiled Georgian aristocrats gather to indulge their carnal desires, fewer still can match the insatiable appetite of their chief provocateur, the mysterious Viscount Rohan.
Pursuit of physical pleasure is both his preferred pastime and his most pressing urge, until he encounters the fascination of a woman who won’t be swayed. And while his dark seduction appalls the pure and impoverished Elinor Harriman, she finds herself intrigued…and secretly drawn to the man behind the desire.

My Thoughts:
I have never read an Anne Stuart book before reading this book. I was a little skeptic before I started because it seemed many people had very mixed reviews on this book. By 100 pages in I was already hooked and was already considering Anne Stuart to be a must read author for me.
The storyline was that great mix of historical romance with a very strong cast of characters. I fell for the main characters as well as the secondary ones. I love when there is a strong female leading character that it seems always really needs to be won over by our rake. For some reason that storyline never seems to get old for me so this was an enjoying read.
The love how Anne Stuart really made me connect with the characters and gave them all great backgrounds. My only complaint was that the “steam” of the romance fell flat in this book. I think there was only one scene where there was one of those classic passionate romance scenes. I also felt that the ending was wrapped up a little quickly in the end. There was this drama that happened 50ish pages before the end and then all of a sudden everything was wrapped in a neat little bow. I felt there should have been a little more of an ending between the main couple of this book. 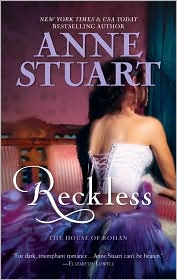 Summary from Barnes and Noble:
Adrian Alistair Rohan lost his faith, and now, a dedicated member of the depraved Heavenly Host, he loses himself in his only pleasure: the seduction and debauchery of beautiful women. Rich, charming and devastatingly skilled in the arts of love, he never fails in his conquests…until Charlotte Spenser.
Charlotte is facing a desolate, passionless future, none of which matters to Adrian, who imagines her a toy until better prey arrives. But beneath her drab exterior, Charlotte is a woman as enchanting as she is brilliant and, lured into Adrian’s world, soon she becomes the seducer, and he the seduced….

My Thoughts:
I was so happy when I won this book from Goodreads from Mira Publishing. I couldn’t wait to dive back into the world that was created in Ruthless. In this second book in the series we get a look at Adrian which is the son of the main couple from Ruthless. I liked how we got to see what happened with the family, I always hate for a good story to end so here is a nice continuation.
I didn’t get into this book as quickly as I did with Ruthless and I can’t really say why that is. In Reckless we get to see even more of the Heavenly Host with a new set of great characters. Once again we get to see the romance develop between the main characters and the secondary ones. Sadly to say with this book I actually found the secondary characters romance to be more interesting than the main characters.
Adrian was another great handsome rake and Charlotte is another great strong woman but for some reason they kept going back and forth with each other. Oh I care for you and want to be with you, and later on they were ignoring each other. This is ok when it happens once or so but when it happens multiple times in the storyline I get a little bored. I know that it is more like real life that way but even real life relationships don’t go between hate and love every other week.  I felt the secondary characters romance was cute and romantic because of the light banter between them.
I have to give this book credit for having more passion and more romantic “scenes”. But when you find the secondary characters to be better than the main ones there is a little something wrong with that in my opinion.